Whether celebrating anything from a special occasion all the way to simply making it through another day at the office – whatever the occasion, step into a world of modern vintage and celebrate in style with Bourbon Steak. And no stop at Bourbon Steak would be complete without partaking in one-of-a-kind whiskey and cocktail experience courtesy of MINA’s signature whiskey cart.

Indoors, on the terrace or at the Chef’s table, we’d like to help you craft and celebrate your special event. Our team will discuss our private dining options and menus for any type of gathering. 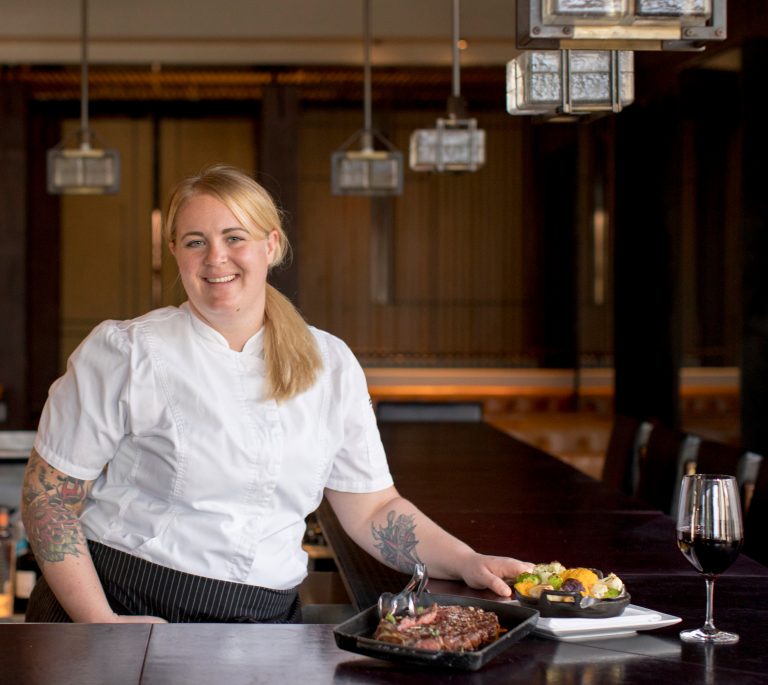 About Our Chef: Sara Garrant

Sara Garrant grew up in close-knit community of commercial salmon fishermen in Southcentral Alaska. Joining the fishermen aboard their vessels as a child, she witnessed firsthand the value of a cohesive team with a strong captain can truly accomplish. From these experiences, her current “make it happen” work ethic developed. Meals were a big part of the summer fishing season, and Sara spent a lot of time in the kitchen, from a young age, with her mom cooking for crews of 12-15 people. The Pacific Ocean still calls her back to Alaska, when the salmon start their yearly run back to the river. Here, she spends the long days with her immediate and “adopted summertime” family, from mornings in the boats to evenings helping her mom prep the next day’s meals.

After high school graduation, Sara left for culinary school to study pastry at Le Cordon Bleu, in Ottawa, Canada, where she found her true passion on the savory side of the kitchen. From there, she headed to the “lower-48”, landing in Phoenix, where she began working at various restaurants in the Valley; most notably, Noca. There, she broadened her culinary style under Executive Chef Chris Curtiss, who opened her eyes not only to ingredients and cooking techniques she had not been exposed to before, but to a true respect and appreciation of local produce, sustainable seafood, and seasonality of the products used on a daily basis.

Her desire for culinary arts kicked in and Sara moved to San Diego, working as a Chef de Partie, at Addison at the Grand del Mar for a season. In 2012, she moved back to help open Isabella’s Kitchen at Grayhawk Golf Club. The opportunity presented itself to work with Chef Curtiss again at Bourbon Steak Scottsdale at the Fairmont Princess in the fall of 2013, where she stayed into the spring of 2015, helping the team transition as Chef Jeremy McMillan took helm. Staying with the Mina group, Sara transferred to Miami to spend a season at what was Michael Mina 74 at Fontainebleau Miami Beach as the Senior Sous Chef. In fall 2017, she was promoted as Executive Chef at Bourbon Steak Scottsdale. Sara is passionate about creating truly memorable dining experiences that guests will enjoy time and again. She diligently works at cultivating a culture of respect, inspiration and commitment amongst her culinary team.

Sara’s downtime is spent between the local dog parks in Central Phoenix, where she tries to tire out her Jack Russell terrier, Kalgin; when that feat is complete, she spends time in her art room, jamming out to music and mentally recharging with acrylic paints and blank canvases.

“Give it a little love. If you take the time to treat the products we are lucky enough to use with respect from start to finish, I honestly feel the guest can taste the difference,“ exhorts Sara.