From the celebrated Chef Michael Mina, Petit Margeaux presents a classic, French patisserie that blends European café culture and Midwestern hospitality nestled in the heart of Chicago’s Gold Coast. Located on the first floor of the Waldorf Astoria Chicago, Petit Margeaux offers a charming gathering place for locals as well as a destination for pastry and coffee aficionados.

Should your sweet tooth beckon, indulge in the finest array of French macarons, palmiers, madeleines, croissants, and other pastries. Complement your French immersion with an exclusively available LAMILL Coffee or a glass of beer or wine. Immerse yourself in the flavors, linger a little, and laugh to your heart’s delight – enjoy this “French Connection” like only MINA can deliver.

For more information on booking a private dining event, contact the Margeaux Events Team at Margeaux_Events@hilton.com or call 312.667.6688.

“Petit Margeaux is a destination for fabulous French-inspired pastry… It is a respite, a sort of time machine that can conjure Parisian boulevards and reacquaint you with the wonders of a past trip to France.” – Chicago Tribune

“Sipping wine and noshing on tartines in the hotel’s secluded, European-style courtyard might be one of this summer’s most pleasant diversions.” – Daily Meal 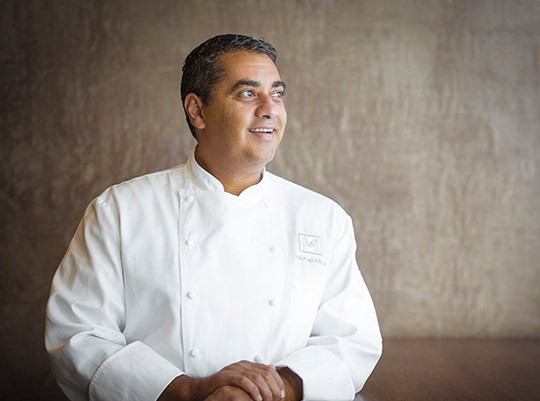 At the start of his career, Chef Mina was presented with the opportunity of a lifetime with then-executive chef of the Bel Air Hotel in Los Angeles, Chef George Morrone. The two were asked to develop a concept and create a menu for an upscale seafood restaurant in San Francisco—the city Chef Mina had dreamed of calling home one day.

Welcomed to San Francisco by a major earthquake his second day in the city, he was unfazed and went to work immediately under Chef George’s direction. Chef Mina dedicated himself to creating a complete dining experience, training the entire kitchen staff personally and refining the menu as chef de cuisine. AQUA opened to rave reviews and national acclaim in 1991. Chef Mina served as AQUA’s executive chef from 1993 to 2002. He was named Rising Star Chef of the Year in 1997 and Best California Chef in 2002 by the James Beard Foundation.

Chef Mina’s culinary and business vision led to the founding of his company, MINA Group, with partner Andre Agassi in 2002. Under the auspices of MINA Group, he has opened over 45 operations around the world, including the Michelin-starred MICHAEL MINA, Chef Mina’s flagship restaurant in the heart of San Francisco. MICHAEL MINA represents the culmination of his core culinary philosophies, Middle Eastern heritage, lauded chronicles as a chef and restaurateur, and personal character.

Honored with numerous accolades—including a Michelin star at MICHAEL MINA from 2012 to 2018, James Beard Foundation “Who’s Who of Food & Beverage” inductee in 2013, Gayot Restaurateur of the Year 2011, Bon Appétit Chef of the Year 2005—Chef Mina continues to dazzle the culinary world with bold dining concepts.